By all accounts, Array’s most recent IPD project was a success. The team met the project goals and metrics; and staff and patients were delighted. It was under budget and on schedule. Nevertheless, when you strip away the rhetoric and success stories of collaboration, innovation and shared goals of the Integrated Project Delivery (IPD) method, this is one of those stories that you don’t often read about, where everyone on the team might share those feelings of success…everyone but the design team.

Array completed three IPD projects prior to this most recent experience, all of which our clients considered successful and all with varying degrees of economic success for Array. In one of those projects, collaboration between the Construction Manager (CM) and the design team resulted in reducing the 48-month phased project schedule by 14 months, a feat most thought impossible at the outset and would not have been possible without IPD. To be certain, Array has been an outspoken advocate of IPD for many years, and even after grappling with the disappointment of our last IPD project, we continue to be strong advocates of this delivery model. Ultimately, we have come away from this last experience with more knowledge than we gained from our previous three successful IPD projects combined. That experience will be extremely valuable to both Array and our future team members on our next IPD endeavor.

Array embraces a collaborative approach to delivering healthcare design services whether or not the model is IPD and regardless of the formalization of team integration. Additionally, Array has completed a significant number of exemplary projects for this client ranging up to $300M. However, the business relationship and integration between team members on this project was formal. The Owner, Contractor and Architect executed a modified AIA C191-2009 form of contract. It was Array’s first experience with the AIA form of IPD contract. The concept of break-even hourly rates for the design team was used with a project budget line item for estimated profits, which were held pending successfully achieving the project goals. The break-even rates for the “at risk” design team members were provided in advance of work performed and calculated based on actual overhead experience plus unburdened labor, as defined in the AIA C191. Project cost savings funded the incentive pool. The team went through a rigorous Criteria Design phase that followed a master planning exercise and concluded with a Target Criteria Amendment signed off by the OAC team. The project comprised two additions totaling 41,000 sq. ft. and 77,000 sq. ft. of renovation delivered in seven phases.

As the project began to unfold, after Target Criteria Amendment sign-off, the Owner requested significant design scope revisions. Many resulted from changes in facility leadership and others came because of other capital programs added to the project. As the Project Management Team (PMT) approved changes, the design team implemented those changes, as required by the IPD contract. When requested, the design team provided design cost estimates using break-even hourly rates grossed up with our profit (84 identified design scope changes, $4.9 million construction value increase). Additionally, medical-equipment-planning and procurement, as well as signage consultants moved from the Owner’s scope to the design team, requiring significant additional design team effort to manage and coordinate.

As the Implementation Documents phase unfolded, the design team began to have difficulty keeping design costs in line with the original design budget. This occurred, in part because we underestimated the increased demands that would be placed on the design team resulting from the volume of meetings required for this fast-moving project, but also largely due to the continuous and constant scope changes that were directed by the Owner, and in some cases by the Contractor, to maintain the budget. As we reached the 27th month of design documentation, the Owner was looking for validation of design costs, which had steadily increased on pace with scope expansion. At the Contractor’s suggestion, the Owner authorized an audit of all design team invoices, with no adverse findings, i.e. the design team’s invoices were in accordance with the contract. Payments to the design team stopped when the original budget plus a “change order” number was reached.

At this point, and at the suggestion of the CM, the Owner authorized a second audit of the design team's invoices. The emphasis of this audit was the structure of each design team member’s overhead rate. The result was that the auditor, engaged by the CM, using fairly arbitrary logic, arrived at hourly rates for the design team that were in the neighborhood of 60% of the design team’s break-even rates and well below market rates. During the six-month pre- and post-audit periods, as well as the six-month audit period, the design team never ceased working. Rather, we continued to work collaboratively and invoiced at our break-even rates. While we surmised that the challenge to our fees was, perhaps, tied to a desire to preserve a larger incentive pool, we were optimistic that in the spirit of IPD, the Owner would conclude that the design team fees were in fact in line with the expanded scope as well as the IPD contract.

Disappointingly, after six months of attempting to reach agreement around our uncollected fees after construction completion, the design team is proceeding with mediation in a non-adversarial fashion.

How did the design team arrive at this point in a project that otherwise, by all accounts, was a very successful project? Below are listed some of those reasons from the Architect’s perspective.

The IPD approach is new to many team members. Though Array held orientation sessions, periodic refreshers were required to remind the team of the IPD approach. Even with considerable discussions and with team members claiming to understand, some key players did not make the transition from their traditional mindset.

In a traditional delivery model, Array would have focused much more on presenting the impact of design team scope-creep early and often. In the IPD model under which we were operating, we were working hourly. While we worked hard to reduce those hours, the design team focused more on meeting the demands of the PMT requests and their impact on the construction budget and project schedule. In the end, it appeared that the Owner did not understand the impact of their decisions on the design budget. This is not to say we did not regularly inform the Owner and Contactor of the increase in design costs, but later we found they did not recognize their contractual obligation to pay for the hours spent by the design team.

Delivering projects using this model can have a significant impact on project management, as well as design time, and should not be overlooked when developing the design project. The substantially increased volume of meetings required of the design team were above the norm, should have been identified up front and the design fee budget increased accordingly. It is important to understand, in advance, the meeting schedule of the Project Management Team (PMT) and the Project Implementation Team (PIT) and advise the team of its impact. 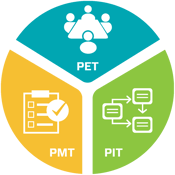 The project used a three-tiered management approach consisting of Project Executive Team (PET), PMT and PIT groups. The PIT and the PMT met at regularly scheduled intervals appropriate to the stage of the project. Under this model, project managers who have very strong organizational and communication skills must participate on the PMT to ensure that decisions are rendered and communicated timely. Unfortunately, on this project, the Owner’s PET executive delegated his authority to their PMT member, essentially invalidating the executive-level sounding board and conflict-resolution.

As a result, there was a communication void with senior Owner leadership, allowing numerous significant design scope issues to languish until they were too far along to rectify them successfully. Each team level serves as a sounding board and conflict-resolution group for the next level down. This system of checks and balances is a key part of the enhanced communication and decision-making process, making this model so appealing. It also might have resulted in decisions that could have affected the outcome of the design scope revisions. With Owners trending to fewer staff, teams must insist on active participation from all levels of the Owner’s staff to achieve the full benefit of the IPD approach.

At several points along the way, based on the Contractor’s projected costs, it appeared the project budget would be exceeded, prompting value engineering and recovery plans. However, in the end, the Contractor announced that final construction costs were coming in significantly under estimates and shared savings incentives were due. The savings were achieved at the expense of the design team. By trying to control costs that were actually within the budget, the Contractor wasted much time and expense. To avoid over-inflated cost projections, teams should conduct a detailed, independent peer-review of construction estimates.

We also found that the Contractor team was not as willing as we had hoped to spend their time providing multiple estimates to confirm construction costs and the viability of design options. In one instance, the Contractor refused to provide an estimate of the Detailed Design phase of several smaller remodeling projects because the Implementation Documents would be done just a month later. That later estimate revealed that their Criteria Design estimate omitted a significant scope item, kicking off a costly value engineering and re-design effort. Regardless of a Contractor’s unwillingness to spend their overhead dollars, on-time estimates are necessary.

Though not as significant as the above issues, there are other issues that should not be overlooked.

The time involved in PET, PMT and PIT meetings and in multiple iterations of the project scope, schedule and budget was significant. Historical design fee data does not apply. A careful study and review of the impact on design fees, along with the assumptions for the development of those fees, with the OA team is paramount for this new approach. IPD is a project-management-intensive delivery model and that impact on the design team cannot be overlooked.

Bidding-type estimates were the norm, rather than conceptual real-time estimates as we expected. Moreover, Contractors regarded any changes to the Implementation Documents as change orders.

The lessons learned on this project will be put to good use on our next IPD, a $300M greenfield hospital. While some issues were more challenging than others, the Owner achieved its goal: the program they desired finished ahead of schedule and under budget. Mission accomplished.