When Array first implemented a daily huddle about six months ago, there were no indications that it would evolve as much as it has. In the beginning, the daily huddle involved the design staff who work on architectural projects and focused on evaluating daily metrics related to our balanced scorecard. 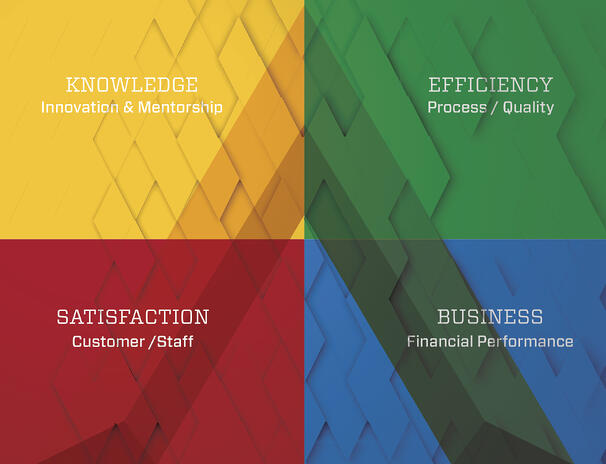 Today, the entire office meets for a huddle twice a week and individual project teams huddle three times a week. Here’s a look at the history of huddles at Array.

Huddles were simple in the beginning. To build interest and gain momentum around the idea of gathering at the same time every day, we started tracking easily quantifiable information that related to our balanced scorecard. The balanced scorecard has four categories, including Business, Satisfaction, Efficiency and Knowledge. We asked questions like, “Do you have a plan for today?” and, “Did you have fun yesterday?” Everyone was feeling good and the huddle was chugging along.

After a month or two of hitting 100% for each of our metrics, the group decided it was time to switch up the questions. When this happened, things got real. Fast. Two of the new questions were, “Did you feel valued yesterday?” and, “Did you feel engaged yesterday?” These were really deep questions that lead to very deep answers. I don’t think anyone expected the huddle to take this turn, but we went with it.

After three months of talking about some of the issues that were causing us to feel or not feel engaged and valued, it seemed like some of the topics were beaten to death. Some people were afraid that we spent a lot of time talking, but no time acting on our words. Others felt that there was no way the individuals at the huddle could make the changes necessary to overcome some of the issues that surfaced. Some days, the huddle would go on for thirty minutes; it became clear that this was more meeting than huddle. Numbers started dwindling. Engagement was waning. Our daily huddle was no longer providing its intended value to the studio.

The huddle could not go on like this. We were struggling; we recognized it. The time for change had come. We asked ourselves, “How can we change the huddle so that it brings value and tackles some of the problems previously unearthed?” Earlier survey data showed that the group liked meeting together in the morning, but it was also important to have a defined time for a quick project team meeting. Other comments indicated that our support staff felt their presence at the studio huddle could bring value. The continuous improvement team decided to incorporate both comments into the redesigned huddle.

A couple of weeks ago, we rolled out the new huddle format. Three days a week, projects huddle. Two days a week, the entire office huddles. We’ve also cut out the metrics and focused on defining priorities and uncovering road blocks. Staff is engaged again. The huddle sticks to a fifteen-minute time limit. Knowledge is shared. Projects are communicating even better than before. Over the next month, we hope to focus on some of the major road blocks that have been revealed by our daily meetings.

Life is good in huddle land, but we have a feeling it won’t be long before refreshing change is necessary again. When the time comes, we’ll be here to update you. Until then, what are some struggles you’ve faced in your huddle? How did you overcome them?