More than 15 years ago, a new healthcare organization sprung from a growing outmigration from Trenton, NJ, into its suburbs and three hospitals competing for a dwindling patient population. Two of the competing acute care hospitals in Trenton merged, forming Capital Health System. Array Architects had deep ties to the System before the merger, and continues as a planning and design partner today.

System Overview
While health system consolidation happens more frequently in healthcare today, it was a bold step in the late 1990s. Three years post-merger, Capital Health maximized scaled economies and stable leadership to begin a dynamic, three-part plan to strengthen its Trenton hospital and provide access to suburbanites with a new ambulatory care facility in Hamilton and a state-of-the-art hospital in Hopewell Township. 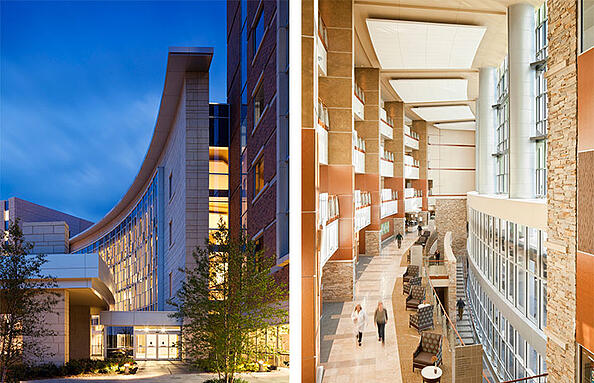 The climate was competitive, with over 10 regional hospitals in Mercer, Monmouth, Hunterdon, Burlington and Camden counties in New Jersey as well as neighboring Bucks County, Pennsylvania. Patients at these hospitals were transferring to tertiary hospitals in Philadelphia and New York, leaving New Jersey to support healthcare systems in neighboring states. Capital Health developed a business model based on enlarging the catchment area and diversifying payer mix to sustain itself and grow to better serve the community. The focus was to maintain Capital Health’s quality, keeping patients in New Jersey and to provide a unique healthcare experience that wasn’t available nearby.

The Plan to Expand

The plan featured three capital improvement projects, implemented over seven years. The first phase was a new outpatient facility in Hamilton, N.J. The second, a $100M transformation of the existing urban hospital into Capital Health Regional Medical Center. The third project was a new, 223-bed medical center in nearby suburban Pennington, NJ, transcending the hospital experience by emphasizing convenience, comfort and best practices for quality and safety. This replaced one of the two hospitals in Trenton (Capital Health–Mercer), which maintained a satellite presence during transition.

A valuable lesson in the Capital Health plan was adaptability. Over the seven-year implementation, initial parameters evolved for various reasons: new physicians, advancing technology, new processes and financial volatility. Managing change takes a team with the right project management, architectural design and construction expertise. If anyone fails to understand the common vision and understand the need for flexibility, the project will be compromised.

Development Manager Anchor Health Properties, which managed the Capital Health–Hamilton project, brought the same vision of consumer-driven experience to the new project. HKS and Array Architects served as the design team. Array brought a tremendous amount of institutional knowledge, having worked with Capital Health for over 25 years. Array also developed the certificate of need (CON)documentation for the new hospital.

Capital Health’s plan called for two simultaneous construction projects: The new hospital in Pennington and a renovation of its Regional Medical Center in Trenton. A stipulation to issuing the CON for the new hospital was that its regional perinatal center (particularly, the Level III NICU) remain in Trenton.

Because Capital Health Regional Medical Center was crowded with other programs, the NICU relocation from Mercer hospital (a second, urban hospital in the System) required a $100 million transformation to utilize all existing space within the facility and increase capacity in key areas.

A transformational renovation proposed by Array Architects was undertaken, allowing for an immediate ROI. Concentrating many of Capital Health’s tertiary services at Regional Medical Center, the plan included updating the Level II trauma center and emergency mental health services department; and adding inpatient rooms, a biplane operating suite, intensive care and intermediate units, a groundbreaking neurological emergency department and the Capital Institute for Neurosciences. Finally, as part of the CON approval, the Level III NICU had to open before the new hospital in Pennington.

In addition to the NICU, the new regional perinatal center required a labor and delivery unit, intensive care nursery and a complex process of documentation for certificates of need and department of health approvals, shepherded largely by Array.

The third step in the plan was a replacement hospital for the aging Capital Health–Mercer hospital in Trenton, which was relocated due to declining population and aging infrastructure. It was the less accessible of Capital Health’s two urban hospitals. For the new medical center, a convenient New Jersey location was sought between the Delaware River and Route 1, along the I-95 corridor. Anchor Health Properties managed the site search and the hospital purchased a 165-acre property highly visible by both New Jersey and Pennsylvania commuters.

The campus consolidated Mercer services and offered new programs in an attractive setting. With 223 private rooms, the nearly one million square foot facility has a glass atrium connecting the medical center with offices and amenities, including a spa, bistro, coffee kiosk and two gift shops. The new Capital Health Medical Center–Hopewell offers advanced services, including the Capital Institute for Neurosciences; a center for digestive health; a center for oncology; pediatric services (including a separate pediatric emergency department), a metabolic and weight loss center, a heart and vascular institute (including a chest pain center), a center for comprehensive breast care, an acute care surgery, orthopedics, radiology (with a separate women’s imaging center) and more.

The new medical center incorporates a birthing center with a Level II NICU sharing staff with the new regional perinatal center at Capital Health Regional Medical Center in Trenton. To accommodate staff sharing, the obstetrics departments in both hospitals have similar floor plans and equipment placement for a universal room effect.

Capital Health Medical Center–Hopewell supports efficient medical processes. Operating rooms were designed to house new surgical technology such as a robotic surgery system. A unique hybrid operating room allows neurosurgeons to perform both endovascular and open neurosurgical procedures within the same room. All interventional spaces are adjacent to a central pre- and post-operating recovery space creating an interventional platform on a single floor.

Safety and quality were key to Hopewell’s layout, with separate corridors for testing and treatment procedures so that inpatients are sheltered from the public mall space. This promotes patient privacy and reduces infection and other risks. There are separate chutes for soiled linens, waste and recyclables centrally located on every nursing unit, leading directly to environmental services. Every room was designed and outfitted to prevent safety hazards such as falls and infections, and is designed same-handed, so nurses and doctors can standardize bedside care. Bathrooms are on the headwall and feature European designs with sloped shower floors to prevent falls.

While new facilities were essential to rebranding Capital Health, leadership knew the services and people are critical. With state-of-the-art facilities and services, staff produce optimum efficiencies for long-term stability and growth. Capital Health’s promise to patients and their families is a new kind of healthcare in peaceful, accessible environments that transcends the traditional patient experience.

This blog was written by a former architectural designer with Array, Shane Williams.