Featured in BloovanConnect and Medical Construction + Design in September 2015.

At the top of the discussion list, the panel noted that capital is often a challenge therefore systems have to be creative by finding new methodologies to get a quicker, more cost effective project. We asked a diverse group of healthcare design and construction professionals what their experiences were with the following project delivery methods, then summarized points worth noting for each one:

In an IPD model, the owner, PM, builder and design team are partners with trades brought in early to assist. The necessary components of IPD are team assembly, education, project cost validation, contract negotiations, collaborative interaction and definition of scope. You need buy-in at the administrative level, as they tend to have concerns about spending money up front. The mindset is that if the money will be saved in the future anyway, then why invest more at the beginning? Audits are done on the regular basis, but you have to get past this hurdle.

The group discussed best practices of this delivery model, and everyone came to the agreement that risk should be defined up front so it is managed effectively throughout the life of the project. There are checkpoints that can be used to keep everything on track such as performing audits on a regular basis, and perhaps creating a clinical advisory team that meets on a regular basis to review the design intent and the input from users. This is so they know if what they are asking for is consistent with what they are trying to achieve. Committees help each other be more accountable and then it is less about what they want as an individual. Often times a master plan is used as a guide book and definition of the intent.

Aside from a clinical advisory team, it is also beneficial when the contractors and trades have checkpoints and analyze one another. IPD is a very collaborative process where everyone works to be more efficient as a team and diminish the cost of the execution of work. The team becomes motivated to spend less time on the job, yet still protect their interests by managing the risk. Their time is tracked and the risk is equally shared amongst them. It may sometimes be T&M (Time & Materials) in order to get started if there is a fixed fee set aside, and then submit a bill of sale for materials plus timesheets for employees to show hours and rates. It is tracked and audited every month.

For a renovation as an IPD project, there are many unknowns that can be eliminated up front and it is helpful to have more people involved earlier. In order to deal with concealed conditions with an IPD contract, do a site investigation and spend this money up front. The money is spent before the IPD contract is put in place and ultimately rolls into the overall value of the contract. It’s a T+M contract for everyone with shared risk, with profit set aside for the whole team if goals are met, therefore no traditional change orders.

There are many reasons and barriers why IPD is not adopted more across the industry, first and foremost being that it is a change in culture. Owners often tend to be apprehensive due to regulatory issues and union challenges. It is tough to get subcontractors on board early and agree to the initial outlay of cash. They are concerned about not seeing an immediate return, hoping that it will indeed show on the back end, which may be hard to prove. Similar to the statement made about the administrators above, people may assume the money would be saved down the road anyway, so why invest it at the beginning? 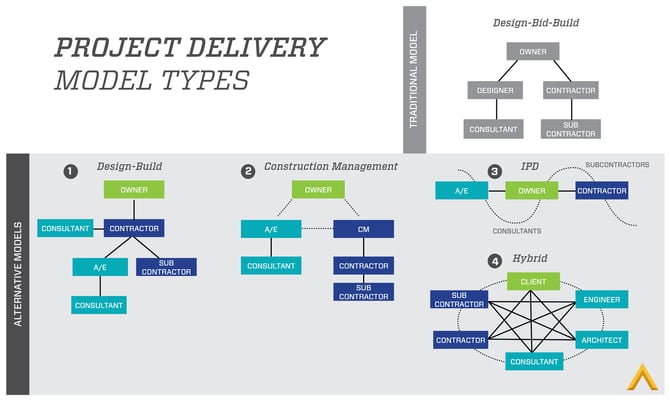 In a Construction Management Model, it is not as much about how we contract, rather more about how we bring the team together early as collaboration is still important. CMs and architects can still be brought on immediately at the same time to spend energy during the pre-con stage to help eliminate VE. The hope is to never even have to open up the contract so there is still a feeling of being a team, not multiple entities working on a project; you all have a common goal.

The Design/Build Model also requires early involvement of architects, engineers, and even medical equipment planners. Some systems bundle multiple projects into one. They will do the initial feasibility study, test fit and programming; then turn it to the CM and design team.

Hybrid Models are integrated project delivery methods that are modified. They take on the collaborative approach, but with independent contracts, which differs from true IPD. These hybrids can close the gap between projects too small for IDP and very large projects that become onerous under traditional contracts. Like the earlier models, hybrids use incentives based on cost and schedule. You cannot be successful with one at the expense of the other because the counter balance is not there. Often the budget incentives are challenging however, because the team may assume there was a change at some point that they should not be responsible for. Was it in the original scope; or was it added afterwards? Tips to be successful are early involvement, collocation, and lots of design participation with the trades and the builder through processes such as Design-Assist.

Design-Assist is when subs are brought in up front during plan and spec development, which will ultimately reduce the time and cost of construction. This is because often times the construction team has suggestions for improvements, so incorporating them early on will ultimately enhance constructability.

It was also recommended to document a pricing process when the contract is put into place, trying ways to get an affordable price, understanding who will have the final word. Also make sure design, process and input from the users stays consistent throughout the process. Don’t just focus on the beginning of the process because different users come on board throughout the project. If they change their minds as users, then they will know the pricing will change.

Public Agencies are more likely to use hybrid models versus a true IPD contract. Without the protection of an IPD contract in place, they use other forms of protection such as making the incentives have incentives; i.e. using clawbacks—the recovery of money already disbursed. They would claw back pieces of other incentives to mitigate that risk. That is how they saw it as sharing their risk. The team would have to give back some of the base fee for the upside potential of getting the full set of incentives. It works better on large projects, because incentives need meat to get everyone’s attention. Public owners can be the sole arbiters, grading at key milestones and having a third party measure them against their metrics.

Speed to Market is another trend where owners are partnering with developers in an attempt to get to the market quicker, using their capital dollars to deliver projects.

There was no conversation around this particular delivery model. It does not seem to be used in the markets represented at the event: Boston, New York, Philadelphia and Washington DC.

All project delivery models have common themes that lead to successful projects. For any delivery method, it is important to understand the goals then measure against them. Make sure you involve as many people as possible early on, including the users, and explain to them how the process will flow. Cross conversations should always happen because users’ comments often inform the design. Conduct training sessions so the team understands how the contract works, and create a matrix to measure goals and successes. Consistency is key for any of these methods.

Knowledge sharing amongst an elite group within the Boston, New York, Philadelphia and Washington DC healthcare design and construction markets has been enlightening. It is interesting to see the similarities and differences from institution to institution, borough to borough and urban to suburban. I look forward to sharing the outcomes of future sessions.