While at my previous firm, one of our clients acquired an industrial building next to their hospital with the intention of converting it to a 300-bed inpatient hospital. The building had a large loading dock on the ground floor, as well as three parking floors and 10 industrial floors above. Soon after the purchase, it became apparent that renovating the building into a hospital wouldn’t be easy. The elevator core was in an awkward location and the parking ramp occupied a large portion of the ground floor. Simply put, it required many more-extensive modifications than the client was able to finance. Soon after this realization, the client announced its decision to demolish the building and construct a new, flexible hospital.

In another project, the client asked the firm to study the possibility of converting an inpatient hospital for other uses, such as labs, college classrooms, a senior living facility and offices. The facility was about 40 years old but well maintained. Our study revealed that, due to its robust mechanical and structural system with regularly spaced columns, and its concentrated core with an open floor plan, the facility had the potential for reuse for as many different functions as the new owner wanted.

Many clients see their buildings as a long-term capital investment and frequently regard them as "100-year" buildings. However, since nobody can predict what patient care will look like 20 years from now, let alone 100, “100-year” buildings are inevitably renovated many times for a variety of uses. Healthcare policy changes, such as the Affordable Care Act, and technology advancements directly and indirectly influence healthcare facilities and the healthcare market overall. 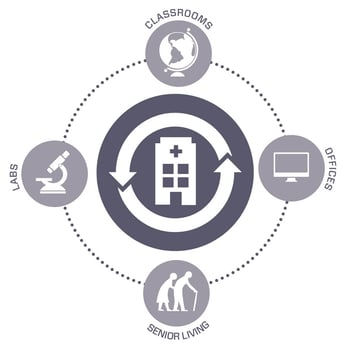 Ambulatory care settings are becoming more prevalent as newer surgical procedures no longer require traditional inpatient settings. Meanwhile, remote patient monitoring devices, including mobile phone apps, have sparked a change in even the most fundamental definition of care giving. The American Telemedicine Association reported an estimated 800,000 on-line patient consultations this year and projected this figure to double in 2016. What does all of this mean for healthcare design today?

It means that the designer should consider future flexibility as one of the main design criterion, even if the client doesn’t explicitly ask for it. When designed correctly, a flexible hospital’s layout of permanent building elements prevents these elements from becoming costly spatial obstacles in the future. As a designer, I believe the building components listed below require thoughtful consideration for future flexibility.

In general, wider column spacing allows for more flexibility in the future. However, it also comes with wider and deeper columns and beams. Aligning columns vertically between patient beds, ORs, imaging, the main lobby, and the parking structure below, if there is one, will be critical. For example, while at my previous firm, I developed a prototype model for a client who didn’t commit to an exact number of beds or ORs, based on their target patient standard. After consulting with the client, we decided to use 24-foot column spacing, which allowed for two beds between columns and a 24 ft. x 25 ft. (600 SF) OR as a base of design. By aligning column spacing vertically between those two modules, the patient beds and ORs could be located on any floor, provided it had the right ceiling height for ORs.

In most cases, mechanical duct size, imaging equipment, manufacturer requirements and special shielding details, such as radiation, require higher floor-to-floor height. To allow for future expansion and flexibility, it’s critical to not only provide adequate floor-to-floor height for an already-designated floor, but also extra ceiling space on a few additional floors allowing rooms to easily convert into departments such as ORs, imaging or special treatment floors, which require large mechanical space and high ceilings, without costly structural modifications.

Typically, elevators; stairs; normal and emergency electrical rooms; telephone/data rooms, and mechanical shafts compose the core of a building. Since these elements may be impractical, or too costly, to relocate in the future, the location of the core will greatly affect the future flexibility. Therefore, it’s important to group them in such a way that they make up larger, more-continuous space and do not fragment floor space.

In addition to these suggestions, extra mechanical and electrical capacity, as well as flexible structural designs with the capability for additional floor penetrations and weights, will allow for easier future renovations.

Heraclitus said, "The one thing that is constant is change.” It was true then, but it is even more so today. Buildings are permanent structures by nature, but if we design them carefully, we can enable them to adapt to new environments without major hurdles and financial burdens. This is where architects’ insight and expertise come in. Although the value of flexibility may not be apparent during the initial few years, the client will soon greatly appreciate this built-in flexibility and continue to do so for many years.

This blog authored by Kwang Lee, former principal and studio director with Array.