For more information about the Henry J. Carter project, see an extended interview and feature by Jenny Ivy of Healthcare Construction + Operations.

In April 2011, Array started visioning and design meetings to re-locate Coler-Goldwater Specialty Hospital and Nursing Facility from Manhattan’s Roosevelt Island to the Harlem area of New York City. The $285-million-dollar project would be divided into two stand-alone projects. The Long Term Acute Care Hospital with 201 beds would be located in the 270,000 square feet of renovation space, the former North General Hospital. The Skilled Nursing Facility with 164 beds would be located in an adjacent 185,000 square feet of new construction, previously the hospital’s parking lot.

As a tribute to Hank Carter, the founder and CEO of Wheelchair Charities, the NYCHHC Board of Directors gave approval on June 28, 2012 to name the new facility the Henry J. Carter Specialty Hospital and Nursing Facility. The original completion date was scheduled for March 2015.

In December 2011, after the Coler-Goldwater project began, Cornell University and its partner, the Technion-Israel Institute of Technology, announced its new applied sciences and technology campus be built on the south end of Roosevelt Island, the location of Coler-Goldwater Specialty Hospital. Construction of the Cornell NYC Tech campus, announced to begin in 2014, required the demolition of the Specialty Hospital.

Due to Coler-Goldwater’s expedited demolition date, the completion and patient move dates were adjusted to November 2013, reducing the schedule by 16 months. To accomplish this acceleration, the entire project team needed to re-evaluate the project schedule and staffing, client expectations, and budget.

The first step, model the project team to Integrated Project Delivery strategies, including collocation of team and incentive program. The strategy of collocation was to implement full team collaboration with accelerated decision-making. This facilitated the ability to quickly identify questions or concerns, and define agreement on solutions. The traditional documentation in RFI response or revisions to construction documents, many times, followed the completed installation.

The second step, streamline the schedule. One timesaving method completely eliminated the design development phase. For this to be successful, several full-team strategy meetings were held, including a team page-turn review of contract documents to evaluate design, details, material availability and possible value management prior to final submission. The client was instrumental in keeping to the schedule and making quick decisions related to operational issues and building functionality.

The Client, Contractor and Design team spent a full day in a page-turn review of each package, incorporating any revisions prior to final submission. The Client reviewed the packages for design intent and approval, and participated in the value management discussions. The Contractor reviewed specific scope to confirm information matched expectations of bid packages and made recommendations on value management. When the bids were returned, the design team and consultants reviewed to confirm that scope was correctly included, as well as evaluate any additional value management opportunities.

One of the last steps was the addition of performance incentives that included shared cost and schedule metrics for both the contractor and design team. This enhanced the team effort, and helped maintain collaboration during critical points in the project.

During this accelerated design and construction process, many potential delays threatened the project schedule and budget. Any one of these items could have adverse effects on the completion date and final project cost. However, these issues were controlled by:

- Careful evaluation of the situation

- Review of solutions that balance budget and schedule

New York City’s Office of Management and Budget (OMB) is required to review and advise the Mayor on issues affecting the City’s revenues and expenditures. For this project, OMB required the LTAC be reviewed separately from the SNF. Each project review included a week-long work session with outside consultants and advisors, working on the behalf of the City, to evaluate space planning, medical equipment selection, MEP equipment and routing, land planning, estimating, and construction management. One comment included moving the Skilled Nursing Facility to Roosevelt Island. Array was required to provide test fits for the Skilled Nursing Facility on Roosevelt Island to help evaluate the best solution for the project. Another comment reduced the height of the building. To accomplish this and maintain scope of services, the project applied for a mayoral override to increase the lot coverage. Design/ Construction team collocation and communication helped monitor this process and maintain the budget and schedule.

The team discovered extensive mold when renovation began at North General, which threatened a cost-savings opportunity to re-use the patient rooms on the west side of the existing hospital. Re-use provided cost savings and allowed these rooms to be grandfathered, locating the 10% ADA rooms in the new construction on the east side of the building. Mold on the gypsum board and rusted studs behind the showers compromised the structural integrity of the wall and blocking required for grab bars.

The project team, an environmental remediation engineer and the Mayor’s office carefully evaluated solutions and recommendations. City Hall was able to confirm that if all of the gypsum board and studs were removed for this remediation, the area would not be considered as “remaining as existing” and therefore would no longer be grandfathered. If these patient rooms could not be re-used and ADA rooms needed to be included, the number of available beds would decrease. Even though reducing the number of beds would have been more cost effective and had less impact on the schedule, it was not acceptable to the Owner.

Working with the environmental remediation engineer, a program was implemented to remove a portion of the bottom of the wall so it was no longer directly on the concrete. Rusted studs were also remediated; and air quality testing was performed to confirm mold was remediated. With all parties working together, the cost and schedule impacts were kept minimal and client expectations were maintained. 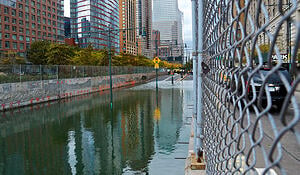 On October 29, 2012, when Super Storm Sandy made landfall at New York City, the Henry J. Carter Project was half way through construction, with only a year to finish. When Sandy arrived in Harlem, the job site was secured to handle the high winds and torrential rains. As a result, the job site fared very well, with little damage and no flooding. The existing facility on Roosevelt Island, where staff and patients were moving from, was another story. They experienced extreme flooding and power outages for an extended period of time. The Client’s experience through the aftermath of Sandy posed interesting questions and solutions for the Harlem project.

Although the Harlem site is not part of the 500-year flood plain, the Client asked the design team to review storm and flood elevations, as well as provide a list of current redundant power capabilities already included in the project. The project team included additional equipment protection, such as re-locating the fuel oil pumps to a higher elevation and elevating critical electrical equipment on higher pads. Additional redundancies in the IT system were included by adding secondary UPS units for each project’s main telecommunication rooms and closets on each floor. Backup air conditioning and flood mitigation added to all elevators. By working with sub-contractors to verify available equipment and coordinate its installation, the hardening of the Harlem campus was able to occur without disruption to the schedule or budget. 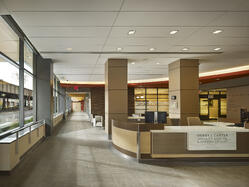 Staff and patients moved into their new space in November 2013. The Henry J. Carter Specialty Hospital and Nursing Facility met its schedule and budget incentives. Basic steps such as understanding Client expectations, constant and open communication and daily documentation updates ensured this project had a successful outcome.

Array is now involved in “Day 2” revisions on the Henry J. Carter Campus. Day 2 revisions are possible because funds were available after patient move-in. Some of the revisions include new scope identified by the Owner after move-in, and inclusion of previously value-engineered scope.