Benefits of Designing with a Topographically-Accurate Site Model

Over the past decade, new software has enabled architects to integrate the processes of building design and documentation into a single streamlined workflow. Firms who have embraced Building Information Modeling are now able to leverage data to better manage project costs, inform client operations and maintain overall higher levels of building performance. More recently, this data-driven approach has successfully made the transition from testing only buildings, to testing whole campuses master plans through properly sited 3D models.

Topographically-accurate  site models give designers access to real-world information from the earliest design iterations all the way through to final documentation. The computer’s built-to-scale environment can be placed on an accurately geolocated site and automatically populated with proper solar orientation, topography, wind analysis information, as well as a myriad of other project information, pulled from the national weather service database. Perhaps the greatest value of a topographically-accurate site model is that it helps designers maintain a multi-dimensional understanding of campus relationships over large areas. This enables architects to better capitalize on site alignments, relationships and views which may otherwise have been overlooked in a 2D environment.

To better illustrate the value of working in a topographically-accurate site model, let’s review examples of value-added design from a recent master planning study on a hospital campus. Like all master plans, the project began with a robust discussion of the long-term wants and needs of the facility. A primary challenge to this site was the client’s need for additional covered parking and improved circulation into the facility. This was an especially complex problem since the site is bound by a ring-road at its perimeter.

The client had an existing civil plan which was automatically converted into a topographically-accurate 3D model of the site upon which designers began studying possible design solutions. It is important to understand that this facility has an especially flat site. At an early conceptual design phase, it is common for designers to work under the assumption that the site was perfectly level, and then in later documentation phases correct the subtle misalignments in their design. By creating a 3D model, rather than working in a flat 2D plan, we hoped to find new opportunities to improve the procession into the hospital without compromising the site’s limited real estate.

The first opportunity realized through the site model was, due to a mild slope at one corner of the site, the possibility to create a code-compliant bridge over the ring-road while maintaining proper clearances for vehicles to enter the site. The bridge was only inches over the required minimum height but with the level of precision that the 3D model provides, building alignments could be determined with absolute accuracy. The creation of this bridge was an important discovery because, for the first time, it allowed for easy expansion on the opposite side of the entry ring-road. This allowed the parking garage to be located near the primary entrance but also preserve the valuable real estate on the site. Patients could park and enter the hospital with greater convenience than in any other proposed location. Similar opportunities for tunnels and bridges presented themselves throughout the design to improve operations. 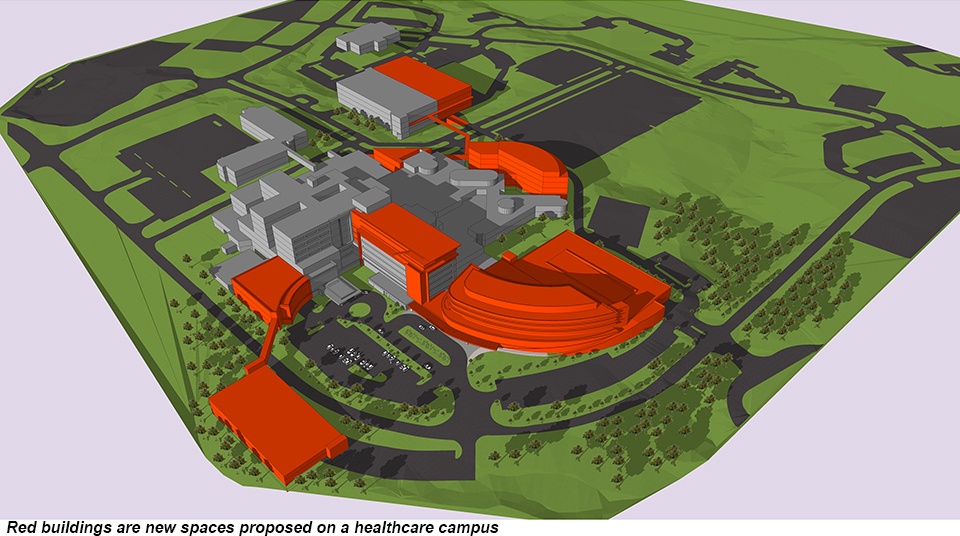 As a result of the newly proposed garage location, the team had a second site planning issue to contend with. The garage was now located directly int the view corridor for the facility’s future cancer hospital. The design of this large new hospital building depended heavily on access to surrounding views as infusion patients would have access to a rooftop garden which overlooked the surrounding scenery. Again, the precision of the site model allowed for these concerns to be studied accurately and quickly. After test-fitting the garage in several masses and locations, it was able to be recessed into a hillside. With the aid of studied retaining walls and area-wells, it could be fit into the landscape, completely obscuring it from view. Computer generated camera views and renderings confirmed that the view from roof-top garden maintained its attractiveness while still maximizing the efficiency of the garage’s location.

In addition to the first garage, a second garage was required to serve the new hospital building. Due to travel distances, placing the garage at the rear of the hospital was deemed the best strategic location. Like the front face of the hospital, the rear face was planned for infusion bays and patient views were critical to the success of the oncology program. Adding the requested parking structure presented a challenge as to how to minimize impact on the views from the infusion bays.

The proposed cancer hospital was over 500’ long. As the team tested the building against the site model it was discovered that there was a nearly 10’ change in elevation over the run of the building. This discovery became a great advantage to the project. The final solution came by placing the infusion bays back from the rear of the building, providing a wide rooftop garden and using the mild slope of the site to lower the garage from view. This design solution informed the massing for the future hospital, placement of infusion bays within the floor plan and allowed the garage to be as conveniently located as possible. Patients also now possessed a clear line of sight from their window to the scenery beyond despite the large garage.

In summary of the example above, designing within a topographically-accurate 3D site model has opened the possibility of alternative locations; allowed for the integration of new circulation paths by integrating new tunnels and bridges; and, coordinated preferred view corridors. These are just a few examples of how working in a topographically-accurate site model can inform your master plan design. More importantly, these opportunities were discovered earlier and with less redesign than in traditional 2D design workflows. Proper site modeling continually proves to be an important component to a thoroughly studied design solution.