Professional Development - What a Difference a Year Makes!

This is a story about an afternoon that changed my life. It was April 2017. I was finishing up my senior year at The Catholic University of America in Washington, D.C. I was in my usual spot – my studio desk – sifting through hundreds of unread emails trying to keep my mind off the fact that I was weeks away from graduating without so much as a clue as to what I was going to do. I came across an email that I had received a week prior from one Jennifer Matthews of Array Architects talking about an interesting event downtown called Mind the Gap: Healthcare Architecture Through Education and Practice. I got all the way to the end of the email only to see that the event was two days away and that I had missed the registration deadline. “Just my luck,” I thought. I was about ready to forget about it when a friend suggested I reach out to see if I could still attend. It turns out my luck wasn’t so bad after all. 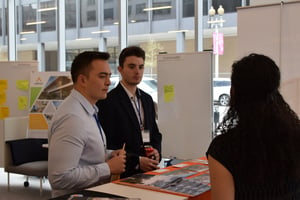 When I showed up to the event the following Saturday morning, I was greeted warmly by Marc Mendoza. He handed me my name tag and said, “Jack Tintle? You probably don’t remember me, but my name is Marc Mendoza. Your older brother and my older brother used to be in St. Matthias’ Boy Scout troop together way back in the day. You were still in a stroller last time I saw you.” “What a small world!,” I thought. So, right way I had a good feeling about the event. However, I could not have imagined how eye-opening Mind the Gap would be.

I sat in the back row listening intently to young professionals present some of their work and talk about their experiences in the industry. I was impressed not only with the quality of their work, but the enthusiasm they showed for the kind of work they did. Then came the industry veterans, who offered wisdom and insights into the life of professional healthcare design practice. Though each of the presenters offered unique perspectives, a common thread seemed to tie them all together: At the end of the day, healthcare architecture is about creating an environment that comforts people in the moments in life that matter most.

Throughout my architectural education, I was taught how to design spaces that delighted people, whether for work or play. The idea of designing a hospital – a place that no one wants to be in – was a challenge that deeply intrigued me and caused me to reflect on the role that doctors, nurses and other healthcare practitioners had played in my own life. When I was 18 months old, my father was working as an air balancer on a job site when the scaffold he was standing on was moved without warning. He fell several stories onto a concrete slab below, crushing the entire right side of his body. He was rushed to three different hospitals in two days before we finally found a surgeon that could save his life as well as his knee and right arm, which had been obliterated by the impact.

While I was too young to remember the accident itself, some of my earliest memories in life are of watching my father painfully struggle to walk. He eventually recovered, though numerous physical ailments related to the accident kept him in perpetual pain for over a decade. Because of a team of talented doctors and compassionate nurses working in state-of-the-art facilities, along with the support of loving family and friends, I grew up with a dad who coached me in baseball, tutored me in math, instilled in me a love of music, art and cinema, and most importantly, taught me by example what it means to be a good husband, father, son, worker and friend. I like to think that being cognizant of my father’s suffering from an early age allowed me to develop a certain degree of empathy and emotional intelligence, which are fundamental and indispensable qualities one must have when designing for people. Those who know me well know that I usually have plenty to say, but admittedly, this is one instance where I struggle to find the vocabulary to adequately express my gratitude.

Another thing that people know about me is that I always do my homework. Attending Mind the Gap as a student underscored the value of being prepared and asking the right questions to further my professional development. In addition to my architectural education at CUA, I also took several courses in public policy that gave me a basic understanding of how healthcare access and delivery in the United States differs from other advanced economies.

At one point during the Q&A portion of the event, I stood up and asked, “In the United States, we spend 17.8% of our GDP on healthcare, which is about 75% more than every other post-industrialized country in the world…In the future, there is obviously going to be a focus on cutting costs…With that in mind, how can we better advocate for the value of our design decisions so that they don’t get put on the chopping block later on?” Asking that question turned a few heads and allowed me to stand out from my peers in a way that I had not been able to do previously in other forums.

After the event, I had some insightful one-on-one conversations with Alec Higinbotham, Fady Barmada, Adrian Hagerty, and others about Array’s office culture and its philosophy of continuous improvement, evidence-based design and technological integration. Their testimonies further attracted me to the firm and helped me answer personal questions that I had been grappling with for months. What kind of firm did I want to work for? What kind of career did I want to have? What did I want most at the end of the day?

I realized that I wanted to work for a firm that was forward-thinking, equipped with the latest technology, poised for future growth and actively engaged in making the world a better place. Array seemed to hit every single one of those marks. I wanted a career in which I could come to work every day and collaborate with thoughtful, talented professionals to design spaces that help people feel better - spaces like (and hopefully better than) the operating room in which my father’s life was saved, the waiting room where my mother sat anxiously awaiting word on his condition or the chapel where my family found sanctuary in moments of crisis. What I wanted most was an opportunity to learn, grow and impact others. I am beyond fortunate that Array gave me that opportunity.

I have been with Array for almost a year now and I cannot help but stand in awe of how much I have learned. From attending client design charrettes and site surveying to generating construction documents and construction administration, I have gained practical experience that has made me more knowledgeable, thoughtful and precise, both as a designer and as a person. In particular, I have enjoyed 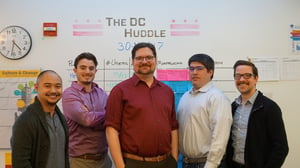 assisting my colleagues in organizing student outreach, such as university career fairs, intern shadow programs and of course, Mind the Gap. It has been incredibly rewarding to interact with students who find themselves in positions similar to the one I was in just a year ago. I am always surprised when students ask me for advice because I myself still have a great deal to learn, but nonetheless I try my best to encourage them to constantly ask questions, to follow what is most important to them and to take advantage of opportunities to learn and forge relationships when they arise. It is my hope that when they end up where they are supposed to be, that they will take a moment to reflect on where they have been and think to themselves, as I so often do, “What a difference a year makes!”