Each year, three hot topics affecting the feasibility, design and operation of Healthcare projects are brought to a broad group representing advisors, architects, administrators and operators.

As the enormous replacement Hospital building spree dwindled in the late-2000s, Deloitte Financial Advisory Services began to ask “what changes are coming to healthcare in the US?” The concept of Healthcare Reform was emerging, the shift toward Outpatient services continued, and costs (both building and operating) continued to rise. 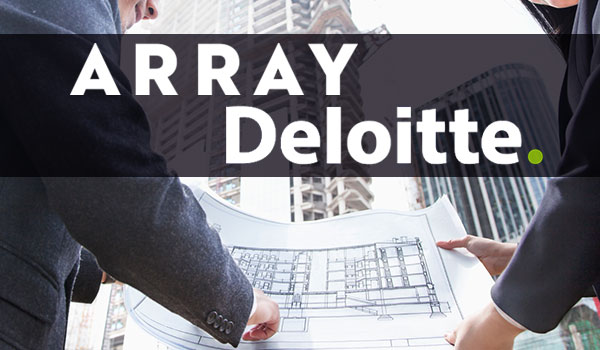 With these issues as a backdrop, Deloitte developed the idea of knowledge sharing across locations, expertise and topics. Array Architects joined in 2012 to capitalize on resources and broaden participation. Typically the topics center around three hot issues currently affecting all participants. The immediacy of the topics sparks a high level of participation and dialogue. Within the three topics are a series of questions that are assigned to a each attendee – identified ahead of the event. The format provides an over-arching structure that keeps the topics moving forward and contains the overall discussion to a pre-set duration of time. In general, a Deloitte or Array participant asks the specific question directed at the specific respondent. Then following the initial response, the floor is open to additional comments and dialogue from all participants. After a period of discussion or upon completion of a topic, the next question is raised and the next response, and so on. By grouping the series of questions into three specific categories, the group is able to cover a broad spectrum of ideas and share an immense amount of knowledge very quickly. The obvious benefit to this sharing is the ability for all participants to see and hear different responses to issues that all of us are facing – and perhaps learn a new perspective. Having personally participated in the past three years’ events, I am repeatedly impressed with the depth of discussion and always come away with a new-found respect for collective knowledge in our professions.

In many ways, having the privilege of preparing the topics for discussion is as rewarding as the knowledge sharing of the discussion itself. The process generally begins in late fall with a general brainstorming of what issues Deloitte and Array are handling and what we see developing in the near future. Then a series of research activities provide further insight into current and developing issues and either confirm or alter the larger grouping of topics. This process generally occurs over the winter holidays, which affords appropriate time for reading and research. Then in early January, the team re-groups to finalize the top three topics and identify target dates for the event. 2014's topics included such hot topics as Big Data, Operational Efficiencies, Hospital Mergers and Cost Reduction Strategies.

Of course, like all great gatherings, the biggest challenge is identifying, contacting and confirming appropriate participants. Typically as early as February the team begins an  emailing campaign with the identified participants. As the participant list formalizes in late March, the team begins developing the specific questions surrounding each topic. As the overall format begins to gel, then specific respondents are identified and focused communication begins. The organization between the Deloitte/Array lead and the participant in preparation of the question/answer allows a structured process during the event.

The day of the event is organized much like a traditional conference or convention with a set time for arrival and refreshments and a formal agenda with opening remarks and introductions. What we have found, however, is the participation and dialogue is much more robust in this roundtable format than typically experienced in a traditional conference presentation of a topic and question and answer period. The format, execution and delivery of the Telesuite Roundtable event provide a level of information and discussion that the participants look forward to every year.

This blog was written by a former architectural designer with Array, Shane Williams.