Did you think, as I initially did, that A3s are only for problem solving? It turns out they aren’t; there are several flavors. For us at Array the meeting account A3 is closest to the Status Report style, albeit on a more incremental project level.

For this article, I’m focusing on the meeting account A3 however much of the process is applicable to other types.

It’s a state of mind

I like to think of A3s as a Haiku of sorts about the meeting. The goal is to impart the essence of what took place to the viewer as clearly and succinctly as possible.

Pay attention in the meeting!

A successful A3 really starts by being aware, actively listening and using the A3 structure as a tool to make sure you’re getting the information you need. As a meeting ends, review your notes and markups to create a summary of what attendees discussed, the analysis performed, the conclusions reached, and confirm the next steps or action items for the meeting.

Make the A3 as soon as you can after a meeting while the information is still fresh in your mind. In particular, focus on the subtleties of the meeting, which will otherwise disappear, to help you do the critical task of editing.

Structure is your friend

An A3 has an inherent structure. Using it helps you organize your thoughts into a coherent account told with images and text. Our meeting account A3s are setup in four parts:

Participants: We use a table to track attendance at each meeting. It serves as a quick visual reference per meeting. It’s also helpful in getting a sense of which participants were consistently involved and which were more occasional. When reviewing A3s, it helps leadership understand who the key players were as a project developed.

Meeting goal: Why are we here? This should be something that can be stated in one sentence. For example, the group met to develop the current state process map for the department.

Analysis: This may be diagrams of a current condition; drawings that were developed in the meeting; images of the session itself, in the case of a design or planning workshop, or any other form of analysis performed in the meeting.

Action/next steps: Identify next steps in the process, as well as the actions that need to be taken, and assign ownership to each one. 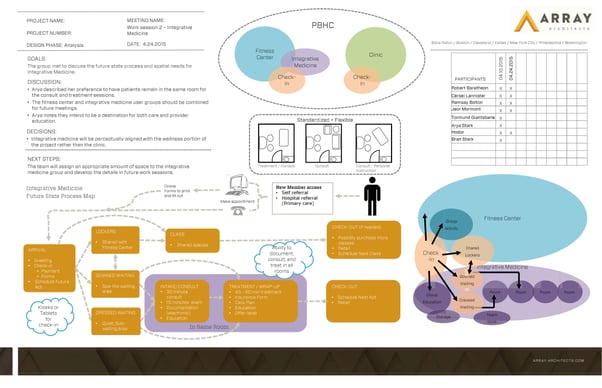 Click the above image to see the full-sized A3.

A former photography teacher of mine, who’s also a dear friend, always reminded his students to “show, don’t tell”. If you must do a lot of explaining about your photograph you’re not using the medium to its . Unlike a photograph, an A3 is composed of words and images but the goal is the same. You want the viewer to understand the essence of the meeting through images and prominent text in a few seconds. Those larger items organize the page and help you build layers of more detailed information in the form of smaller text and images.

After your meeting, review the images you have—PDFs, snapshots of sketches, pictures of the meeting itself, such as a client workshop, site survey photos etc.—and choose the ones that most clearly support the key topics of the meeting. Then arrange them in the analysis section to help tell the story. Use notes with larger text and leaders to call out key information in an image. The most important image(s) should take prominence on the page with supporting images receding visually. These can be smaller images and, if their color competes visually, they can be converted to gray scale.

Don’t be afraid to edit

In keeping things short and sweet you may miss something. That’s OK! If you’re tasked with making the A3, take ownership of it. If you need to, save a draft with more information than you need and then edit it down to what you see as the essence. Consult with your colleagues who also attended the meeting for a final review and then send it out to all participants. If you missed something, they will let you know and you can make an adjustment.

A3s are not meeting Minutes

While they have their place and some clients require them, meeting minutes for the most part go unread and unused on projects. This is often because they are filled with a lot of extraneous information and, in a field such as architecture that relies heavily on visual communication, they are often unclear and leave a lot of room for misunderstanding. Even the best meeting minutes with a very rigid structure can become extremely cumbersome for people in leadership positions to sift through to find the relevant information they need to support a decision.

Distilling the essence of anything is harder than it may seem. With an A3, the goal is a clear, concise single-page account of an event that nearly anyone can review quickly and have a solid understanding of what occurred. To achieve that result takes time and practice. If you’ve never done one before, the first few will take longer than you’d expect but once you have a few under your belt, you’ll find it easier and quicker. A hidden benefit of making A3s is that it changes the way you think. It helps you arrange your thoughts in a meeting and learn how to be both an active participant and a thoughtful documenter of the event.

This blog post was written by Seena Hassouna, a former healthcare planner with Array.