Array Lights up the Runway at 2018 Cosmo Couture Fashion Show

Co-authored by Madeline Hill, an interior designer with Array.

As healthcare architects, we strive to not only design buildings for the care of patients, but also to support those in need. Last month, Array gathered a team from the DC office to channel their inner “Project Runway” as we participated in the 2018 Cosmo Couture charity fashion show, hosted by the International Interior Design Association’s Mid Atlantic Chapter.

The event, hosted throughout the country by many IIDA chapters, is a collaboration between local design firms and a sponsoring manufacturer or vendor representative to create a garment reflecting this year’s theme of Lore, “a body of traditions and knowledge on a subject or held by a particular group, typically passed from person-to-person by word of mouth.” The event took place at the Washington National Cathedral in Northwest DC, and each year the event hosts a local beneficiary. This year, proceeds from the event benefited the Love for Livi Foundation. Livi, a DC-based and Maryland-born interior designer, was catastrophically injured in an accident in September 2017. Livi, family and friends attended and kicked-off the evening by sharing her story with the show attendees. 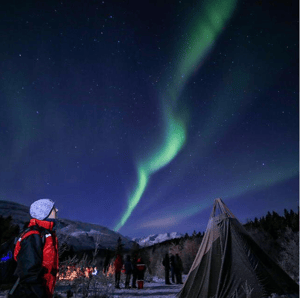 Array, partnering with 3form, decided on the subtheme of The Algonquin Legend of the Northern Lights. This folklore began from the belief that the Northern Lights were the souls of their departed ancestors. The Algonquin tribe had the belief that the Creator of Earth, Nanabozho, moved to the far north and set a large blaze of fire, which transcended into the dark night sky in the form of a sweeping aurora to indicate to his people that he was always with them, even from afar.

With this story in mind, the DC team collaborated with each other and our local 3form representative, discussing the best way to portray this story through a garment modeled during the event’s show. Rules for the show included:

Because it was the team’s first year participating in the event, and we had limited resources for using large tools, the team challenged 3form to use interlayers from various Ecoresin products. We started by picking fabric interlayers that we felt could be portray the Northern Lights and the Algonquin story, which included Wander, Hush and Junction.

The angled bustle of the skirt was painted Junction and Star-crossed interlayers that represented the burning fire and billowing smoke from Nanabozho’s flames. The body of the dress itself, made of the Hush interlayer, was dyed in a rich Indigo bath to represent the night sky, while embodying a process native to the cultures. Bringing the eye up, just as the streaming Northern Lights would, the highlight of the garment was the “northern light” collar which cascaded around the dress and up the model’s neck and shoulders, lifting the viewers eye to the top of the garment. The collar was constructed with a “fabric-mache” technique. Using painted strips of Wander and Junction interlayers, the team formed the collar using a wet glue mache. The team got creative to build a form for the collar out of recycled office supplies to help bring their vision to life and due to the delicate nature of the collar, the team left the final fitting of the collar until just the night before the show. 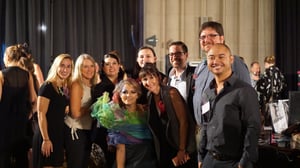 Much thanks goes to the whole Array and 3form team who worked on our costume and Madeline Hill, an interior designer with Array, who graciously volunteered as our model. Array's attendees at the fundraiser included (clockwise): Marisa Martinelli, Linda Hill, Laura Morris, Parker Cutler, Alec Higinbotham, Bill Brown, Marc Mendoza , Clairanne Pesce and Madeline Hill (portraying the Northern Lights).